This project records on film people who actually experienced the atomic bombing talking about it. Thus far over 600 people have been kind enough to relate their stories to the Nagasaki National Peace Memorial Hall for the Atomic Bomb Victims. Those who wish to share their testimonies with us are requested to contact us via the survivors association (the recommending organization) that they belong to, or directly in person at the Memorial Hall.

A DVD containing the testimonial videos of the person recommended will be presented to your organization. Please utilize it for peace education etc. NB: DVDs may not be presented in the event that we are unable to gain the consent of the person in question.

Your testimonies will be preserved indefinitely at the following places.

The Memorial Halls in both Nagasaki and Hiroshima are equipped with computers where visitors can simply search for the testimonial videos. Those who have let us record their testimonies will be presented with a finalized version of the DVD. 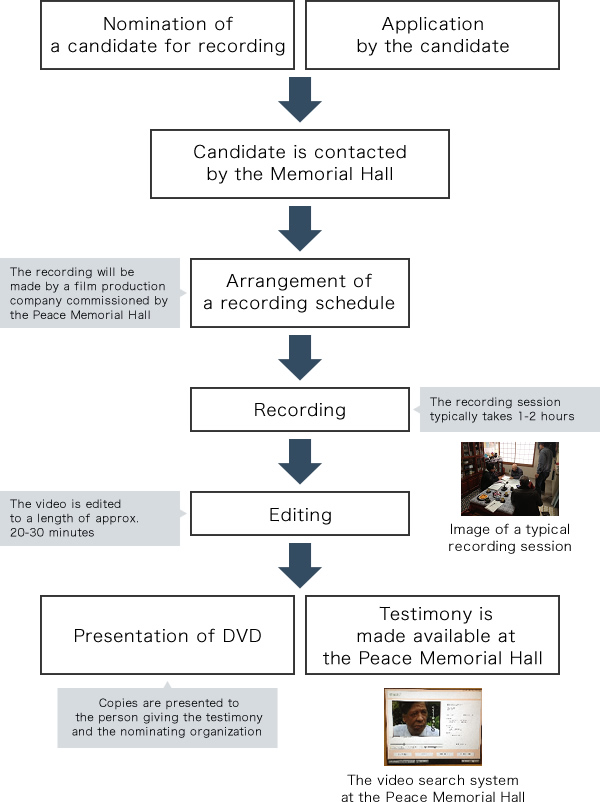 The late Mr. Akihiko Ito was a broadcast journalist who made it his life’s work to travel the length of Japan collecting interviews and recordings of the testimonies of atomic bombing survivors. In total 1,005 people provided testimony, which was recorded on open-reel audio tape or cassette tape. These recordings have now been digitized, and certain selections may be heard at the Peace Memorial Hall.
In addition, we have received some of the testimonies broadcast on the radio by Nagasaki Broadcasting Company (130 in total) in its program “Talking about the Bomb” (broadcast since 1968; now titled “Nagasaki Testifies”) and make these available to the public as well.