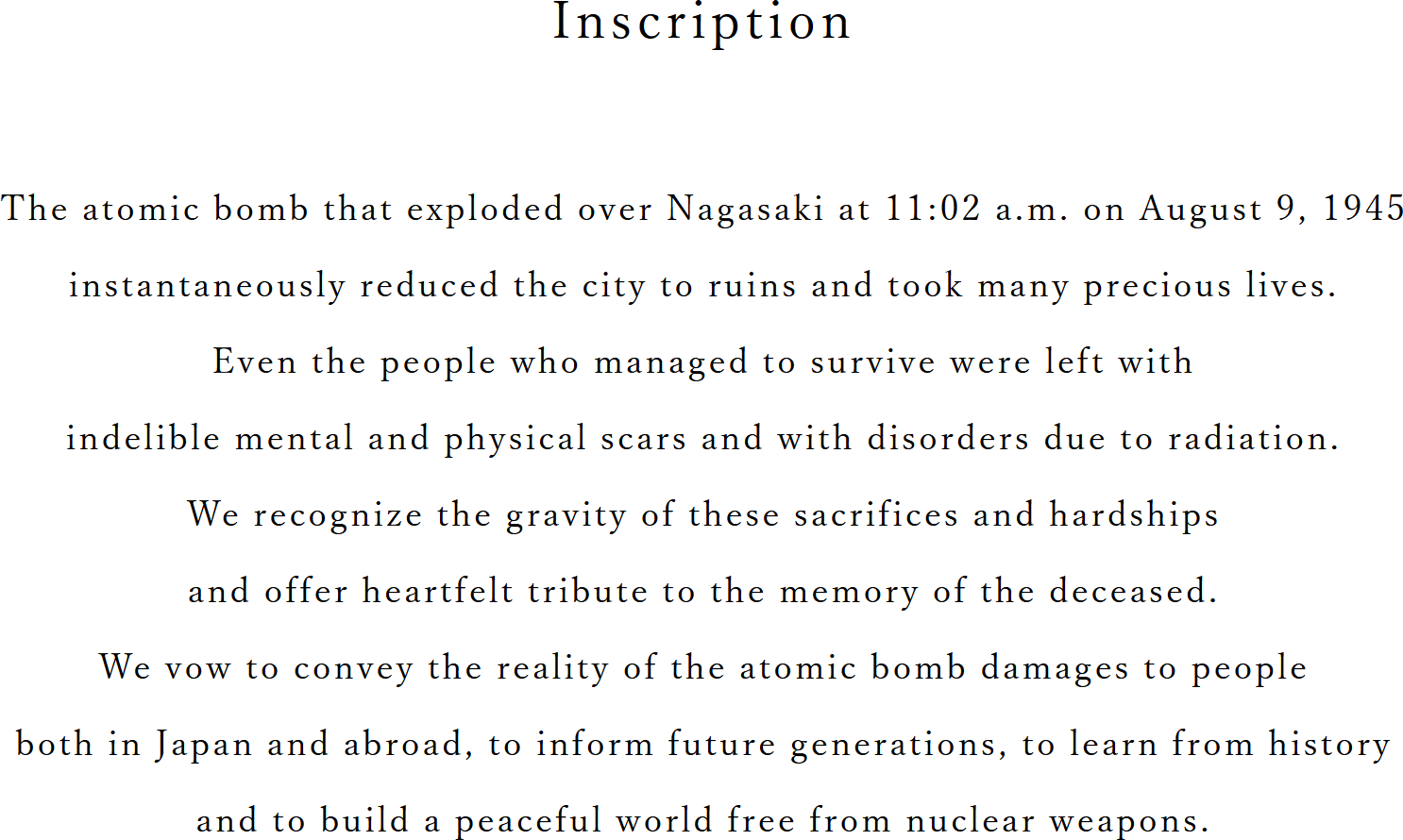 The Nagasaki National Peace Memorial Hall for the Atomic Bomb Victims was established for the purpose of preserving as a nation memories of the precious sacrifices of the victims of the atomic bombings. In addition to serving as a memorial, it also serves to commemorate everlasting peace. The hall seeks to deepen understanding about the catastrophe of the atomic bombings among people around the world and see that knowledge of these terrible experiences is passed down to subsequent generations.

National Peace Memorial Halls for the Atomic Bomb Victims have been established in Hiroshima and Nagasaki, two cities where vast numbers of precious lives were lost due to atomic bombings. The halls perform the following three functions; to memorialize peace and mourn the victims of the bombings, to gather and process materials and information related to radiation exposure, and to promote international cooperation and interaction. At the Nagasaki Memorial Hall particular emphasis is put on the latter of these functions. By sending out information about radiation exposure and the experiences of bombing victims and their relatives to the world, the hall endeavors to communicate the reality of the atomic bombings.

A place of commemoration and prayer

The Memorial Hall hosts services aimed at increasing awareness about peace and activities commemorating the victims of the atomic bombing.

Collecting and disseminating information and archival materials about the atomic bombing

We gather materials relating to the atomic bombing out of a desire to pass on the experiences of the victims to future generations, heighten awareness about the importance of peace, and deepen international understanding.

We engage in international cooperation and exchange in order to increase awareness about the experiences of the atomic bombings and the preciousness of peace.

Outline of the facility

The Nagasaki National Peace Memorial Hall aims to create a tranquil and solemn atmosphere which expresses a sense of mourning for the atomic bombing victims and commemorates everlasting peace. At ground level is a sculpted basin filled with the water so desperately craved by victims of the bombing. The quiet walk around this basin is intended to give visitors an appropriate sense of solemnity before entering the hall. Corridors of light rise up through the basin from the Remembrance Hall below , making it possible for people to pay their respects at ground level as well. Respects may also be paid at night, when the basin is illuminated by approximately 70,000 lights.

Lower Level 2 is the site of the Remembrance Hall, the Library/Reference Area (where visitors may access photographs and information on the deceased and peruse their memoirs), the Lounge (the focal point for the Nagasaki Hall’s efforts at international cooperation and interaction), and the Peace Information Corners. Lower Level 1, with its Memoir Exhibition Corner and Remembrance Hall Loft, was designed so that it can be toured in a limited amount of time. The two levels are linked to allow for easy passage between them.