A Message from the Director

Hello, everyone. This is Noriyasu Takahira, the director of the Nagasaki National Peace Memorial Hall for the Atomic Bomb Victims.

The other day International Olympic Committee Vice President John Coates came to our facility to lay flowers in the Remembrance Hall. As the visit was in advance of the Tokyo Olympics, it drew much attention and security was elaborate. Following the laying of flowers, Mr. Coates took a folded paper crane out of his chest pocket and said, “I brought this with me.” Then he carefully placed it beside the wreath. The offering of flowers was made up of white carnations and orchids, with a decoration of white eustomas and orchids at the top. It was truly beautiful.

During our limited time together I informed Mr. Coates about the facts of the bombing and he repeatedly replied “Arigatou. While in the Remembrance Hall Anteroom, he looked on most intently as the names and photographs of victims of the atomic bombing were displayed. Our Memorial Hall is a place to mourn the great numbers of people who lost their lives to the atomic bomb and pray for everlasting peace. On this occasion, I felt how important it is to continue to be a facility where people from Japan and other countries can empathize with one another. 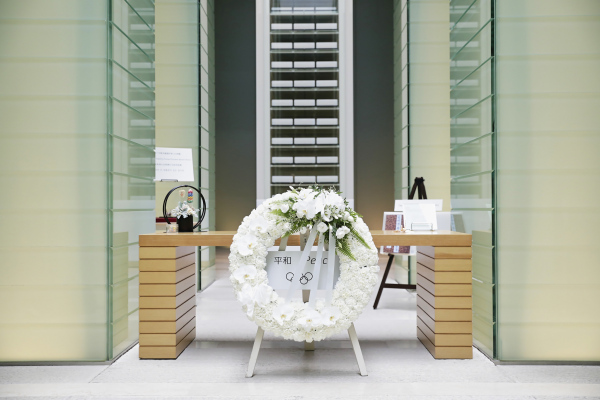